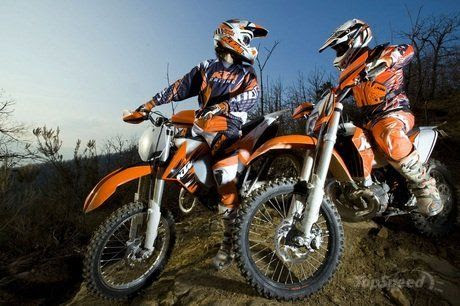 High-performance enduro bikes are always in great demand, especially if it’s to be used in competitive races like the Extreme Enduro or the E2 World Championship. When that’s the case, KTM has a solution for one of the best enduro bikes on the market today: the 250 EXC.

Built with the ideal combination of performance and weight, the serial Erzberg winner is the enduro to beat when you’re in need of a highly competitive bike. For 2012, the bike comes with improved performance courtesy of a redesigned airbox and the flow-optimized intake flange between the airbox and the carburetor that ensures improved charging with fresh gas. Together, these features result in even freer revving and even more power in all rev ranges, making for one of the most powerful two-stroke machine in its class.

In addition to the improved performance, the 250 EXC also comes with a completely revamped chassis with a new frame and the latest WP upside-down fork with wider adjustment ranges and a new setting. All the performance and suspension improvements make the 250 EXC a bike that’s practically unbeatable in terms of weight, mechanisms, and overall stability.

There’s not a lot of things about the KTM 250 EXC that speaks of mediocrity. Certainly, anybody that rides this bike will attest that it’s one of the most rounded and versatile in its class.

Find out more about the Kawasaki 250 EXC after the jump.

Posted by cyrenepenya at 1:50 AM