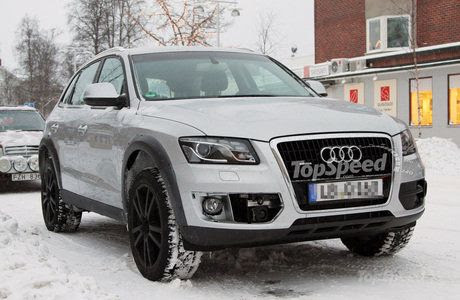 News on the future Porsche Cajun has quieted down as of late, but a few spy shots have catapulted the baby Cayenne back to the headlines. Our spy photographers have caught the Cajun doing a bit of winter testing somewhere in Northern Sweden.

The Porsche Cajun will be built on the same platform as the Audi Q5, which is why this mule looks identical to Audi’s SUV. However, somewhere under that wider track lies Porsche’s future baby crossover, packed with better brakes and wheels. The engine line-up will also be borrowed from the Q5, meaning both both petrol and diesel variants, fine-tuned to Porsche specifications for higher power figures. A hybrid powertrain may also be in the works and may combine a 2.0 TFSI engine that produces 210 HP with a 44 HP electric motor. This will help Porsche get closer to the average CO2 emissions goal of 130 g/km that all car manufacturers need to reach by 2015.

At the initial launch, the Porsche Cajun will be available with four doors, but a sportier two-door model will follow shortly thereafter.

Posted by cyrenepenya at 6:50 PM