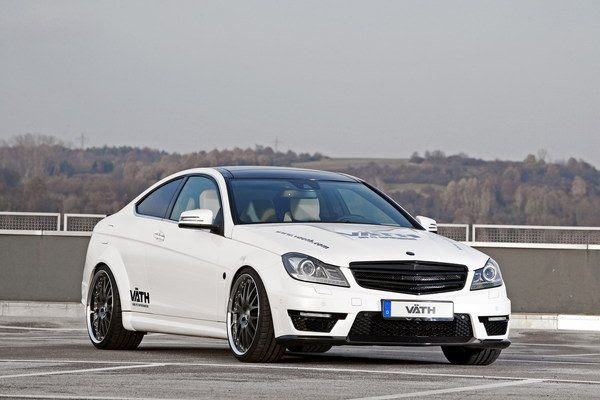 Mercedes’ plans to offer a "simple" C-Class model were diluted when the company also announced they were planning an AMG version of the model, but Vath is muddying that water even further by offering a souped up variant of that AMG model. The classic look of the C-Class mixed with AMG speed and Vath’s ability to improve on that speed is a combination that leads to the C63 AMG Coupe V63 Supercharged, and a killer Sunday drive.

Before we get down to the nitty gritty, we’ll go over some of the less speedy additions to the Mercedes. Vath took care to add a carbon front spoiler and a visible carbon-fiber rear diffuser with enlarged fins to improve the aerodynamics, as well as a new set of three-spike 9x20 inch forged rims. There is also a Clubsport coilover suspension that allows the C63 AMG to be lowered by 20-65 mm. The interior was only mildly touched, with the addition of a sports steering wheel covered in leather and different wood and carbon fiber insertions.

Now that that’s out of the way, we can move on to the highlight of the package. The C63 AMG’s original 6.2 liter V8 engine’s electronics were individually fine-tuned and a compressor system with a Vath water intercooling system was then added to jumpstart the vehicle’s standard 457 HP all the way to 680 HP and 619 lb-ft of torque. This boost will allow the C63 AMG V63 Supercharged to sprint from 0-60 mph in only 4 seconds, up from the standard 4.5 seconds. The speed limiter was also removed, leaving the Mercedes with a top speed of 208 mph.